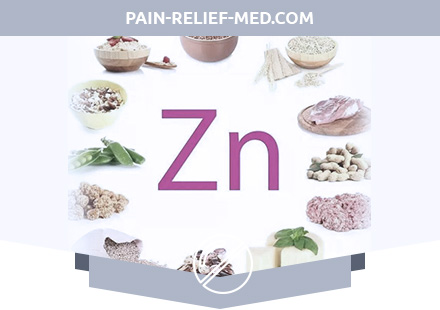 What is Alimentary Zinc Deficiency?

Zinc is a structural component of biological membranes, cellular receptors, proteins, and is part of more than 200 enzymatic systems. Vital hormones such as insulin, corticotropin, growth hormone, gonadotropins are zinc-dependent, it is necessary for the formation of red blood cells and other formed elements of the blood. It is believed that zinc has antioxidant properties and also improves the action of other antioxidants.

For normal functioning, the human body needs about 15 mg of zinc per day.

If you answered yes to at least 2 questions, then your body probably lacks zinc.

Scientists know that the treatment of many diseases should begin with the appointment of zinc-containing drugs to patients. Especially with vegetovascular diseases, anemia, stomach ulcers, prostate tumors, personal skin diseases, as well as burns.

Zinc deficiency can be caused by a violation of the thyroid gland, liver diseases, poor absorption, lack of this mineral in water, food, as well as too much phytin in foods, since phytin “binds” zinc, making it difficult to assimilate (by the way, you can’t take zinc together with selenium, since these two elements are mutually exclusive.). If there is too much protein in food, this can also be the reason for the lack of zinc in the body. In diseases: bronchial cancer, inflammation or cancer of the prostate gland, other cancerous tumors, leukemia, there is also an overrun of zinc, which is necessary for cell growth.

Calcium supplements and a calcium-rich diet (dairy products) can reduce zinc absorption by almost 50%, while caffeine and alcohol intensely remove it from the body.

Zinc is reduced by the use of contraceptives (oral contraceptives). Corticosteroids (cortisone, prednisone), prescribed for a number of diseases (arthritis, bronchial asthma, etc.), also reduce the level of zinc.

Zinc is rapidly excreted from the body under stress, as well as under the influence of toxic metals, pesticides, etc.

The level of zinc in the body decreases significantly with age, therefore, older people in one way or another experience zinc deficiency.

As you know, zinc refers to essential trace elements. Its reserves in the body are not large. So an adult has only 1.5-2 g of zinc, which, for example, is 2 times lower than the iron content. Zinc is found in all organs and tissues of the body, however, its highest concentrations are determined in skeletal muscle, which contains 62% of its amount. The bone system, prostate gland, and cornea are also rich in zinc. In newborns, 25% of zinc can be present in the liver. The main amount of zinc received (40-45%) is absorbed in the duodenum by the mechanism of controlled diffusion. It was found that zinc absorption is inversely proportional to its concentration in the intestinal lumen. Having entered the enterocyte, zinc combines with metallothionein, which according to some data regulates not only absorption, but also the release of zinc. In the bloodstream, the main zinc ligand is albumin, which carries up to 2/3 of the metabolically active trace element. Small amounts of zinc are transported to the brain by histidine and cystidine.

The daily need for zinc is 8-10 mg, only 20-30% is absorbed from food. Meat, dairy products, seafood, nuts, eggs are the richest in zinc. It should be borne in mind that the qualitative composition of products can significantly affect the absorption of trace elements. Thus, the absorption of zinc is prevented by phytin, which is contained in large quantities in plant products, which forms in the presence of calcium an insoluble complex with zinc that is not absorbed in the intestine. Also, the absorption of zinc is inhibited by hemicellulose, chelating agents, and calcium.

The biological role of zinc

The biological role of zinc is diverse. It is necessary for cell growth and division, bone tissue development, regeneration processes, reproductive function, brain development and behavior. Being a component of more than 300 enzymes, zinc takes part in all types of metabolism, is part of the genetic apparatus of the cell, representing about 100 zinc-containing nucleoproteins. Zinc plays a significant role in the functioning of the immune system. The thymus hormone thymulin, which is necessary for T-lymphocytes, is zinc-dependent, as a result of which, with zinc deficiency, the total number of T-lymphocytes and T-suppressors, as well as the phagocytic activity of neutrophils, are reduced. Zinc takes an active part in the processes of regeneration, since it is necessary for the synthesis and stabilization of DNA. Superoxide dismutase, which is involved in the regulation of lipid peroxidation, is also a zinc-containing enzyme, in connection with which many authors attribute this trace element to antioxidants.

The indispensability of zinc for the course of cardinal processes of vital activity is clearly manifested when a deficiency occurs. A classic example of zinc deficiency is enteropathic acrodermatitis. It refers to a rare, inherited by an autosomal recessive type of disease. It manifests in infancy and without treatment leads to death. It is believed that as a result of a genetic defect in Paneth cells, absorption of zinc in the intestine is impaired. Clinically, acrodermatitis is manifested by typical signs of zinc deficiency. Skin lesions in the form of chronic erythematous-bullous dermatitis on the extremities and around the natural openings of the body, frequent secondary infection, pathology of the growth of nails and hair, allopecia come to the fore. Severe gastrointestinal disorders with impaired absorption syndrome, eye symptoms (blepharitis, conjunctivitis, photophobia, clouding of the cornea), neuropsychiatric disorders, growth retardation, hypogonadism, anemia, hepatosplenomegaly, and a decrease in the severity of taste and smell are characteristic. Zinc deficiency experienced by a woman during pregnancy leads to a wide range of congenital malformations in the fetus – splitting of the upper jaw, upper palate, microcephaly.

Our land is becoming poorer in zinc, and a high-carb diet leaves us even less. Calcium supplements and a calcium-rich diet can reduce zinc absorption by almost 50%. Zinc is rapidly eliminated from the body under stress (physical, emotional or chemical), as well as under the influence of toxic metals, pesticides and other environmental pollution. Aging inevitably puts us at a disadvantage, because the stomach does not secrete enough acid to absorb this mineral. Based on the prevalence of zinc deficiency among sick old people, the use of supplements should probably be considered mandatory for all older people.

Zinc supplements can help prevent Alzheimer’s. In the body of people affected by this disease, it is almost impossible to detect the zinc-dependent hormone of the thymus gland – thymulin, and this implies that zinc deficiency can play a role in the occurrence of the pathological process.

People with AIDS are almost invariably deficient in zinc, which contributes significantly to the ongoing decline in an already damaged immune system.

Symptoms of almost all skin diseases weaken or disappear with an increase in zinc stores in the body. At doses of 100 mg or more, it is especially effective in treating acne, which some researchers consider a disease caused by a deficiency of zinc and one of the essential fatty acids. The effect of the additives does not appear immediately – weeks and months may pass before you notice its results on your skin.

Benign enlargement of the prostate gland (prostate adenoma), which has now reached almost epidemic proportions among men over fifty, is inextricably linked to inadequate intake of zinc throughout life. Frequent urination and other symptoms of prostate adenoma are very reliably reduced with the use of zinc supplements, especially in combination with the extract of palm serena (dwarf palm), essential fatty acids and several amino acids, including glycine, alanine and glutamic acid. Zinc deficiency can also worsen sperm production and testosterone production, while treating a group of men over sixty with dietary supplements containing zinc, their serum testosterone levels literally doubled.

Zinc deficiency can lead to many pregnancy complications, including miscarriage, toxicosis, fetal growth retardation, and difficult delivery. Even a moderate daily dose of 22 mg, tested in one study, allowed women to give birth to significantly larger babies. Doses of zinc of the order of 10-60 mg per day are completely safe to take during pregnancy.

The zinc content in the body is usually low in women experiencing premenstrual syndrome. It is possible that a mineral deficiency leads to a decrease in progesterone production, which, in turn, can cause cravings for sweets and salty.

It is possible that zinc deficiency contributes to one of the most common causes of blindness – macular degeneration. Taking supplements in doses of 100 to 200 mg can slow the progressive destruction of the retina causing this condition.

Forty percent of people with Crohn’s disease are deficient in zinc, and replenishment of this mineral in the body is critical to overcoming this common digestive upset. In developing countries, the inclusion of zinc-deficient dietary supplements in children who are deficient in this mineral can reduce the incidence of dysentery and diarrhea.

For those who are affected by rheumatoid arthritis (an inflammatory joint disease), the zinc stores in the body are usually severely depleted.

With a decrease in the zinc content in the body compared to the optimal level, we become more vulnerable to the toxic effects of environmental pollution. In one study of two hundred randomly selected people with chemical hypersensitivity, 54% of them showed low levels of zinc.

Zinc deficiency develops in diseases of the gastrointestinal tract, systemic diseases of the connective tissue, blood diseases, psoriasis, neoplasms and other pathological processes.

However, since the bioavailability of zinc is low (about 30%), preparations with a high zinc content are most acceptable for the treatment of zinc deficiency conditions, in particular Zincteral (KFZ Polfa, Poland), which contains 124 mg of zinc sulfate (45 mg of elemental zinc in one tablet) )

During treatment with Zincteral it is necessary to limit the use of alcohol, coffee and strong tea.

Some components of food, for example: folic acid (found in green vegetables), salts of phytic acid (found in grain), dairy products and eggs – worsen the absorption of zinc. Since long-term treatment with Zincteral can cause a decrease in the level of copper in the blood, it is necessary to take copper preparations at the same time.

Dyspeptic symptoms (heartburn, nausea, metallic taste in the mouth) are sometimes possible with Zincteral treatment. In this case, it is necessary to take the drug during or immediately after a meal.

Zincteral is contraindicated in case of renal failure and individual intolerance to the drug.

There are many other areas of medicine in which zinc preparations are widely and successfully used. Insufficient intake of zinc in the body of a pregnant woman leads to insufficient growth and a delay in the development of the fetus, as well as deposition in childbirth.

Pediatricians use zinc preparations for delaying neuropsychological and cognitive development in preschool and school age.

Dermatovenerologists include Zincteral in the treatment regimen of resistant forms of trichomoniasis.

And this is only an incomplete list of the possibilities of using zinc in medicine. Specialized publications constantly publish the results of a huge number of studies in this area of ​​interest to modern practitioners and pharmacists.