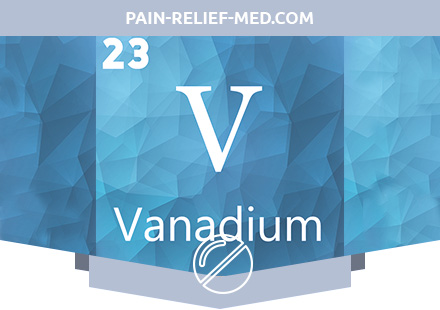 What is Vanadium Deficiency (Insufficiency)?

Vanadium is a trace element, important for the functioning of the cardiovascular nervous and muscle systems, is involved in the formation of bone tissue and the regulation of carbohydrate metabolism

Vanadium is found everywhere in the body, most of it is found in bone tissue, is also present in the heart muscle, muscle tissue, spleen, thyroid gland, lungs and kidneys. Excreted in the urine.

Reduce the effects of vanadium chromium and some proteins.

Despite the fact that the average person’s body contains only 0.10 mg of vanadium, it is nevertheless very important for the passage of many processes in the body, performs a number of functions:

Daily Vanadium Need
The daily requirement for a healthy adult in vanadium is about 10-25 mcg.

Vanadium deficiency may be accompanied by the following symptoms:

Which leads to an increased risk of developing diseases such as atherosclerosis and diabetes.

In large quantities, vanadium exhibits toxic properties in the body, a dose of 2-4 mg is considered lethal. It is also proven that prolonged regular use of more than 10 mg of vanadium daily can lead to toxicological consequences. The main symptoms of an overdose include:

It should be borne in mind that some substances enhance the toxic effect of vanadium, they include: ascorbic acid, chromium, ferrous iron, chloride and aluminum hydroxide.

Assessment of vanadium in the body is carried out according to the results of blood and urine tests. The concentration of vanadium in the blood plasma is 0.015-1.0 μg / L, urine – 0.2-1.0 μg / L. As an indicator of intoxication of the body with vanadium, the results of the determination of cystine in the blood and urine are used.

A certain amount of vanadium is ingested with drinking water.