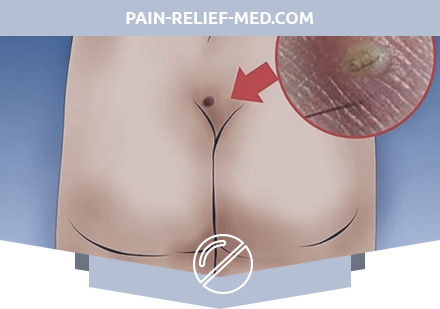 What is a Pilonidal Cyst?

Pilonidal cyst (Synonyms: pilonidal sinus, epithelial coccygeal course) is a congenital anomaly of the development of the skin of the sacrococcygeal region associated with incomplete reduction of the vestigial caudal ligament. The disease is characterized by the presence of congenital primary fistulous retracts in the interagluteal fold. Often hair will stand out from such retracts. With trauma, hypothermia, suppuration of the epithelial coccygeal passage occurs. After spontaneous or surgical opening of the purulent cavity, secondary fistulas form. Without treatment, the disease is prone to recurrence.

Most researchers believe that the epithelial coccygeal passage is a congenital defect in the development of the skin due to incomplete reduction of the muscles and ligaments of the tail.

However, others reject the congenital nature of the disease and attribute its occurrence to the abnormal (incorrect) incorporation of growing hair into the subcutaneous tissue of the sacrococcygeal region. This theory has gained even more supporters after the discovery of pylonidal passages in other places (in the interdigital spaces at hairdressers, in the amputation stump, in the axillary fossa, etc.).

In 1887, a neurogenic theory, or theory of the coccygeal medulla, was proposed, according to which the formation of the epithelial coccygeal passage comes from a fragment of the terminal section of the spinal cord undergoing reverse development.

The theory of ectodermal invagination, which appeared in 1882, explains the formation of the epithelial coccygeal passage by the introduction of an ectoderm, which forms in the embryonic period.

Some authors are of the opinion that in the origin of this pathology, the main is the reverse development of the coccygeal vertebrae, which is confirmed by the existence of a rudimentary caudal ligament.

Basically, this disease manifests itself between the ages of 16 to 25 years. The disease is extremely rare in people of the Negroid race, a frequent lesion is noted in the Caucasian peoples, Arabs.

Men suffer from this pathology almost three times more often than women. Many authors have noticed that the incidence is significantly higher among people whose activities are associated with long walking or car driving, for example among officers and soldiers during long crossings and military operations.

The epithelial coccygeal passage is located along the midline in the intergluteal fold, blindly terminates in the subcutaneous tissue of the sacrococcygeal region, opens on the skin with one or more point holes (primary epithelial passage), and is a narrow epithelial tube. The waste products of the epithelium lining the course are periodically released through the pinholes outwards. Blockage or infection of the excretory ducts, mechanical trauma lead to a delay in the contents in the lumen of the course and contribute to the occurrence of inflammation. As a result, the epithelial coccygeal course expands, its wall collapses and the surrounding fiber is involved in the inflammatory process. The abscess or phlegmon of the sacrococcygeal region that developed at the same time sometimes reaches a significant size and can open out in the form of a purulent fistula, which is usually called a secondary hole.

In 25-50% of cases, inside the epithelial coccygeal passage or a cyst that has arisen in its place, hair is contained that can invade the side walls and form additional passages. The abscess sometimes reaches a significant size and, as a rule, breaks through the skin, forming the external opening of a purulent fistula.
There are uncomplicated and complicated by purulent process epithelial coccygeal passage.

With uncomplicated epithelial coccygeal complaints, as a rule, there are no complaints. Sometimes dull, mildly expressed pains in the coccyx area may be noted, aggravated by sitting or with minor injuries of this area. Itching, maceration of the skin, scanty discharge in the intergluteal fold may be noted.

In the complicated course of the epithelial coccygeal passage, stages of acute or chronic inflammation (fistula) and remission are possible. Indisposition is noted, body temperature rises (up to 38.5-39.0 C). With the formation of an abscess (suppuration) – the pain intensifies, takes a pulsating character, excludes the possibility of adopting a sitting position. The external openings of the secondary fistula resulting from spontaneous opening of an abscess or phlegmon may be located away from the midline, sometimes close to the anus. Around the secondary holes appear more or less pronounced scar tissue changes. Some secondary holes may heal, while others may function.

When the inflammatory process is in remission for many months or years, the secondary openings of the course are closed with scars; when pressing on the course of the course, there is no discharge from the primary openings.

Primary acute inflammation begins very often after an injury, usually reaches its peak quickly, an abscess is opened in a clinic or it is opened independently and a fistula remains, because the abscess cavity is connected with the hair cyst itself. In other cases, the wound heals with fragile, easily traumatized scar or multiple, as if drawn in scars (“pits”). Local changes are so typical that it is almost impossible to confuse the coccygeal passage with other lesions in this area. When methylene blue is introduced into one of the fistulas, the paint leaves all other passages and secondary fistulas and does not pass into the rectum.

Treatment of fistulas on the basis of the epithelial coccygeal passage is only operational, but another problem arises, especially relevant for draftees, who, at the very first medical commission, find a pinhole with thin hairs protruding from it in the intergluteal fold, in the immediate vicinity of the anus. If this anomaly of the skin did not cause any complaints in the young man and he did not know about it at all, then such people can be considered practically healthy and fit for military service without restrictions. However, more often such a skin course is manifested by purulent discharge or recurrent ulcers, and then surgical treatment is necessary. No ointments, poultices, etc. will not help; continuous infection of the thin and sometimes rather long (up to 3-4 cm) subcutaneous canal, due to the proximity of the anus, makes surgical treatment necessary.

In a planned manner, the operation is carried out after the abatement of acute phenomena (in the phase of secondary fistulas). Intervention begins with staining of fistulous passages (chromofistulography). Excision is performed in a block to the sacral fascia. At the final stage, as a rule, hemming of the edges of the wound to the bottom is carried out.

Anyone who has undergone radical surgery for epithelial coccygeal passage, it is advisable to comply with the following recommendations:

Only an integrated approach with the correct implementation of each of the stages of treatment of this pathology allows to achieve good immediate and long-term results.

Relapses are most often caused by insufficiently radical surgical intervention with the abandonment of sections of the epithelial coccygeal passage, primary passages, improper management of the postoperative wound.