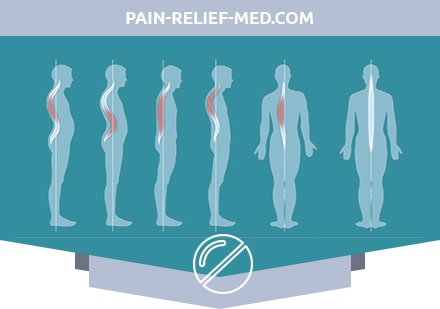 What are Postural Disorders?

Posture – the usual position of the body of a laid-back person – is formed in the process of the child’s physical development and the development of static-dynamic functions. It is known that in parallel with the acquisition of the skills of holding the head, sitting and standing, the child gradually forms physiological curvatures of the spine – a bend in the cervical region with a bulge forward (cervical lordosis), a bend in the lumbar region with a bulge forward (lumbar lordosis).

A large role in the formation of such deviations in the position of the shoulder girdle is played by the insufficiently harmonious (uneven) development of certain muscle groups, especially against the background of general muscle weakness. The formation of pterygoid scapula, for example, is associated with a decrease in the strength of the rhomboid, middle part of the trapezius and anterior dentate muscles. Bringing the shoulders forward depends on the predominance of the strength of the pectoral muscles and the insufficient strength of the muscles that bring together the shoulder blades, and the drooping shoulders are the result of insufficient traction of the upper part of the trapezius and anterior dentate muscles.

It must be borne in mind that such a change in posture may also depend on other reasons: displacement in obese people of the anterior severity trajectory of the body, which is leveled out by bending in the lumbar region; wearing high-heeled shoes, etc.

The wavy shape of the spine and the presence of buffer formations in the form of intervertebral discs having a cartilaginous structure, provide high spring qualities, protect internal organs and the central nervous system from shaking. The environmental conditions (duration and magnitude of the load, the position of the body during training sessions, work) and the functional state of the muscles have a certain effect on the shape of the spine: normally existing bends can increase or decrease, the position of the shoulder and pelvic girdle changes, and an inclination towards asymmetric body position can occur .

The vicious position of the body when standing and sitting gradually assumes the character of a stereotype, and this incorrect habitual installation can be fixed. The most typical deviations in posture are stoop, round, flat back, pterygoid scapula, lumbar hyperlordosis. Posture defects associated with a change in the position of the shoulder girdle include forward and
drooping shoulder joints, pterygoid scapula.

Strengthening of lumbar lordosis is also noted in certain pathological conditions, for example, with bilateral congenital dislocation of the hips, paralysis of the gluteal muscles in patients with poliomyelitis. Strengthening the physiological curvatures of the spine is especially often associated with a violation of the conditions of static load against the background of reduced functional ability of the muscles.

Vicious body positions when sitting, taken during training sessions, should include a landing with a strongly bent forward body. This situation may be associated with sitting in a far-flung chair or sitting at a table too low, as well as with the large distance of the book or notebook from the child.

A major role in impaired posture is played by the functional state of the muscles. With poor development of the back muscles, their fatigue develops more quickly, the child’s body when sitting takes a bent position and is held mainly by the tension force of the ligamentous apparatus of the spine. A position with a bent body can also occur when standing (the so-called sluggish posture). Physically weak children sometimes experience a smoothing of the physiological bends of the spine (flat back).

Prevention of violations of posture is based on two main groups of activities:

A great influence on the proper development of the child’s body, which is one of the main conditions for preventing the occurrence of various posture disorders, is exerted by the general hygiene regime: regularity in food intake, sleep hygiene, adequate air exposure, the right combination of study and rest, use of hardening agents, etc. emphasize the importance for children of daytime rest and the need to sleep on a semi-rigid bed with a small pillow under the head to maintain the correct position of the spine.

An essential preventive role is played by the observance of a special regime that has a beneficial effect on the statics of the child. It is necessary to monitor the correct development in the child of the nature of co-dynamic functions, starting from the youngest toddler: to spread on the stomach in a timely manner, to develop the skill of crawling, standing and walking, comparing the training time with the general physical development and motor capabilities of the child. In addition to rational furniture, sufficiently spacious clothes, the correct position and length of elastic bands for stockings are important to prevent postural disorders in young children. Starting from preschool age, the development of the child’s correct body position when standing and sitting is of great importance. At the same time, it is very important to timely eliminate a number of vicious positions and postures, some of which are caused by the habit of not holding properly (for example, the habit of sitting with a bent body and relaxed back muscles during training sessions), while some are associated with a violation of school hygiene rules (for example, lack of compliance between the height of the table and chair).

A certain preventive value is the reduction in the duration of the static load (standing, sitting) with poor physical development of the child. With a tendency to stoop, a decrease in the load on the spine can be achieved by conducting training sessions at the table with an oblique installation of the cover (like a drawing board), which allows the child to tilt the case back and lean on the back of the chair.

In adolescents and adults, you can also cultivate proper posture, developing a rational posture while working at a workbench, at a machine tool, during clerical studies.

A group of measures that affect the overall physical development and functional state of the muscles is no less prophylactic, since the active holding of the body, shoulder, pelvic girdle and lower extremities in the correct position is possible only with the active participation of muscles. To achieve this goal, differentially selected exercises of morning hygienic gymnastics, physical education during lessons, breaks between classes, saturated with physical exercises of an applied and playing nature, should be used.

In the conditions of the school, attention should be paid to conducting physical education during the training session, which is important for active rest and helps to restore the working capacity of the back muscles, as well as physical exercises in the air and in between classes. For this, it is necessary that appropriate shells be installed on the school site (swing, vertical and horizontal stairs, crossbars, balance beam, etc.).

In the general complex of means affecting physical development, a particularly important role belongs to a correctly constructed physical education lesson, the purpose of which is to exert a general strengthening effect on the child’s body, and not to develop narrow motor skills of a sports nature. The correct selection of sports activities, the raising of interest in a student, their introduction into the regime of a child’s day will also have a great impact on its proper and harmonious development.

In morning exercises, attention should be focused on exercises that strengthen muscles, bringing together the shoulder blades, expanding the chest, as well as exercises that strengthen the longest back muscles (extensors of the body) and abdominal press. In this regard, it is advisable to perform physical exercises not only while standing, but also from the supine position, on the stomach, standing on all fours and include exercises with a gymnastic stick in the complex.

For children with deviations from the general physical development, reduced functional ability of certain muscle groups and insufficient endurance to physical activity, additional physical education classes with a special focus should be organized at the school.

Such events are of especially great preventive value for children weakened by recent diseases, as well as those suffering from cardiovascular insufficiency. Special physical exercises, selected taking into account the deviations from the child’s general health and physical development, can be performed not only at school, but also at home in the form of independent studies.

So, for children with a tendency to stoop (strengthening the general curvature of the spine back) and the round back (increasing chest kyphosis mainly in the upper part of the spine), intense curving of the body with localization of movement in the chest of the spine (and not in the more mobile lumbar) is especially shown.

With drooping shoulder joints, the abduction of arms through the sides up, raising the shoulders, stretching the arms up with resistance is useful.

When prone to lordosis of the spine, it is advisable to make alternating movements of the legs from the supine position (“bicycle”, alternately raising straight legs), switch from the supine position to the sitting position, and also extend the legs in the hip joints from a standing position and lying on the stomach, which strengthens the gluteal muscles. With the smoothing of the physiological curves of the spine, it is necessary to increase the functional ability of the muscles of the back and abdomen. For more intense tension of certain muscle groups, exercises with light weights are useful (a dumbbell weighing 0.5-1 kg, medical medicine weighing 1-2 kg, depending on the age of the child). To develop a more symmetrical position of the shoulder girdle, exercises with a gymnastic stick help (for example, transferring it in a column one at a time through the head), transferring the ball, as well as exercises with self-correction in front of the mirror.

The development of proper posture is also facilitated by exercises in balancing and balance (for example, exercises on a log, on the rail of a gymnastic bench). To improve posture, the use of ordinal exercises (building, turns, walking, etc.) should be emphasized.

In order to develop correct posture, as well as to verify its correctness, special tests can be used. For example, a child becomes his back against the wall so that the back of the head, shoulder blades, buttock, legs are in contact with the wall, and takes a step forward, trying to maintain the correct position of the body.