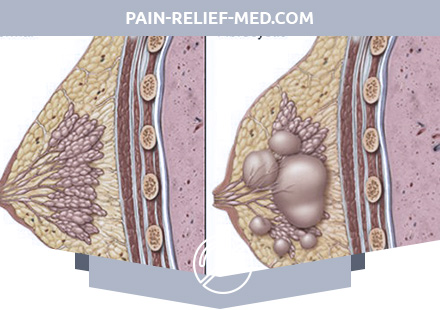 Cystic mastopathy is a disease characterized by an imbalance of hormones in a woman’s body and accompanied by excessive tissue proliferation with the formation of cysts. The disease occurs in women between the ages of 30 and 50.

Among the causes of cystic mastopathy, several provoking factors are called. First of all, this is a hereditary predisposition, environmental factors, unhealthy diet. These factors and many others are reflected in the hormones that are present in a certain amount in the female body.

Lack of sexual intercourse (women who do not have regular intimate relationships, do not get satisfaction during intercourse, have a psychological rejection of sexual relations)

Fertility disorders (the disease is typical for women who cannot conceive a child, for those who have had several abortions, for those with menstrual irregularities; also at risk of women who did not breastfeed their newborn, or the breastfeeding period was short)

Hereditary predisposition (the mother or immediate family is diagnosed with mastopathy)

Long-term diseases of the reproductive system (cysts of the appendages, endometritis, salpingo-oophoritis)

Among the main symptoms are:

These signs may not be present all at once, sometimes a woman has only 1-2 symptoms. An increase in the size of one or two glands is also likely: at the same time, they are sensitive and painful to the touch. This is due to breast swelling, which is more or less, depending on the phase of the menstrual cycle (when the hormonal background changes). Along with this, there may be headaches, swelling in the legs and body, dyspeptic phenomena, psychoemotional disorder (irritability, inappropriate reactions like premenstrual manifestations). From the first days of the monthly cycle, such signs, as a rule, stop.

Fibrocystic breast disease
Among mastopathies, there is such a fibrocystic one, which differs in symptomatology from a purely cystic one. Cystic mastopathy is accompanied by the appearance of a different number of peculiar nodes with liquid contents – cysts, with clear contours and a soft structure. The appearance of cysts is accompanied by pain, especially just before the onset of critical days.

The fibrocystic form is characterized by excessive growth of connective tissue, which leads to the formation of a large number of small cystic tumors. There is a clear liquid in the cysts, but due to their size, doctors cannot always make a puncture. The pain can also spread to the arms and shoulders, axillary areas.

Diagnostics of the Cystic Mastopathy

It is recommended to examine the chest from 4 to 12 days of the monthly cycle, because on other days of the cycle, you can make a mistake in the diagnosis. First of all, external examination of the breast is important. Factors such as the shape of the mammary glands, the color of the skin, and the differences between healthy and affected breasts, if any, are recorded. Next, the doctor uses the method of palpation (feeling), first in a vertical, and then in a horizontal position of the patient. It is also important to feel under the armpits to see if the lymph nodes are okay.

The next stage of correct diagnosis: ultrasound examination (ultrasound of the mammary glands). This method does not harm the woman, providing the doctor with the necessary information about the condition of the epithelial tissue. Ultrasound provides an opportunity to simultaneously examine the nearest lymph nodes.

Also, a very common X-ray-type procedure is mammography. A picture of the gland is taken to determine the presence of a tumor in this area. This method is undesirable for women under 40 years of age, as well as for pregnant and lactating patients.

Often, with mastopathy, a diagnostic puncture is prescribed, which can also be used for therapeutic purposes. In this case, the cystic contents are sucked off with a thin needle, after which the walls of the cavity are glued together, and the cyst gradually dissolves. Discharge from the milk canals is also subjected to cytological analysis. After setting and confirming the diagnosis, the doctor develops a treatment regimen for mastopathy.

The main stages of treatment of cystic mastopathy:

It is recommended to exclude from the diet foods that provoke the growth of fibrous tissue and the formation of liquid contents in the cyst. These include coffee, strong brewed tea, chocolates, and carbonated sugary drinks. Experts say that breast diseases are often associated with poor bowel function: constipation, a violation of the bacterial flora. Therefore, with mastopathy, a woman should eat food that contains a large amount of fiber: fruit, vegetable dishes, seasoned with herbs. You need to drink from 1.5 liters of clean water per day (tea and coffee do not count). The use of alcohol and fatty foods should be minimized or completely eliminated, because they negatively affect the production of hormones.

With frequent diseases of mastopathy, a woman should carefully consider what kind of underwear she wears. When choosing, you need to take into account all the parameters of the breast. The wrong shape and size of the cups can squeeze the breast and deform it. This is especially true for those with large mammary glands.

Vitamins are essential for strengthening immunity, normalizing hormone levels and endocrine system function. First of all, with cystic mastopathy, doctors prescribe vitamins of group B, A, E and ascorbic acid.

Often, mastopathy is combined with edema, both of the chest itself and of the extremities, which requires the appointment of mild diuretics. In this situation, it is better to use herbal diuretic teas, as well as eliminate or drastically limit the amount of salt in the diet.

These funds are needed to eliminate chest pain – a common symptom of cystic breast disease. The worst pain is before the critical days. Taking these drugs for long courses is not recommended.

These medications are needed to combat stress, which is one of the factors contributing to the development of mastopathy. Common preparations are valerian or motherwort, sedative teas and infusions, which are the most natural and harmless remedies.

The development and function of the mammary gland is impossible without the action of a number of hormones. First of all, these are estrogens and progesterone. But sometimes the body produces too many of these hormones, because some of the tissues of the gland overgrow. In order to reduce their effect, the so-called antihormones are prescribed – drugs that reduce the bioactivity of estrogens. These drugs include toremifene and tamoxifen. For the same purpose, doctors prescribe oral contraceptives – first of all, Janine, Marvelon. They suppress the production of steroids, androgens, estrogens, stabilizing significant changes in hormonal levels in the body. However, not in all cases of cystic mastopathy, contraceptives work effectively, so sometimes the doctor has to reconsider such an appointment. The doctor may prescribe gestagens – progesterone preparations (morning, dyufaston, etc.), which keep the growth of cystic formation with subsequent gradual regression. In addition, antiprolactins (parlodel), androgens (methyltestosterone), gonadotropin antagonists (zoladex, buserelin) are often prescribed.

A non-hormonal agent based on indole-3-carbinol – Mammolen will help to restore the hormonal balance of estrogens and progesterone, as well as reduce the excessive growth of tissues in the mammary glands.

Mammolen is a herbal remedy, indicated for use in women with mastopathy and mastodynia to increase the effectiveness of hormonal treatment or as an alternative to hormone therapy (if there are contraindications to the use of hormones).

Special homeopathic medicines for the treatment of cystic mastopathy effectively reduce the amount of prolactin, while there are practically no side effects. Also, their big plus is that they have very few contraindications for use. Among such funds, cyclodinone, remens, mastodinone are most effective.

These drugs are effective for hypothyroidism. But with autoimmune thyroiditis or thyrotoxicosis, they are not prescribed. Iodine preparations for the treatment of cystic mastopathy: iodomarin, mamoklam.

If medications have not given the desired effect, they resort to surgical methods of treating cystic mastopathy. Also, surgery is used if there is a suspicion of the development of oncological pathology.

Do not self-medicate! The choice of drugs and their combination is determined by the doctor. The treatment regimen is influenced by the characteristics of the patient and the development of cystic mastopathy of the glands.

Prognosis for cystic breast disease
In most cases, with cystic breast disease, the prognosis is favorable. But in the absence of treatment, the disease gradually progresses, clearly manifesting itself when the patient reaches the age of 30. The earlier treatment is started, the more chances for an absolute recovery without consequences.

Cystic breast disease threatens breast cancer. This is the reason why it is important to timely identify the disease and start therapy. The prescribed treatment must be carried out correctly, adhering to the scheme from start to finish. This is the only way to prevent the dire consequences of breast cancer.

For the prevention of cystic mastopathy, you must adhere to the following rules: